Obeying God Rather than Men 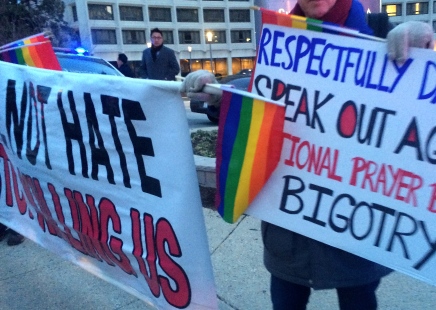 As we are approaching the moment when the Supreme Court will decide for everyone across the US whether it will redefine marriage by implanting the same-sex partnership under its umbrella, let us consider the bold and clear statement released by Ronnie Floyd, the president of the Southern Baptist Convention: “The Supreme Court of the United States is not the final authority nor is the culture itself. The Bible is God’s final authority about marriage and on this book we stand.”

Marriage between a man and a woman is not a derived social construct open to redefining or changing. It is not a product of social evolution or cultural convenience so that it could be amended at will. Its origins and monogamous heterosexual structure are the direct and culminating product of God’s deliberate act of Creation. God designed it as an intended, complementary and heterosexual union between a man and a woman.

It is noteworthy that it is not only the Judeo-Christian tradition that firmly defends the heterosexual character of marriage. All ancient cultures follow in the same tradition, without a single record in existence of any experimentation whereby the marriage bond would have included the same sex couples. Even in the ancient and sexually promiscuous Greece, Mesopotamia and Rome no one dared to call the same-sex unions marriage.

Marriage was never designed or intended to include the same sex unions. Homosexual partners cannot partake in marriage because they lack the essential complementary reproductive features. The very purpose of marriage is lost in the same-sex unions because they cannot “be fruitful and increase in number” Genesis 1:28. In other words the whole history of human race depends on the fact that marriages produce future generations of people by giving birth to children. Is it then surprising if we are already witnessing a widespread confusion through the introduction of multiple players in surrogate motherhoods/fatherhoods as one way of assisting the same-sex partners to solve the problem of homosexual parenthood; to the point that the children born into such families are loosing any real sense of who their real mothers and fathers are, and how many of them contributed to bringing about their birth?

There is no such a thing as marriage equality, if by the word we mean the embrace of the same sex couples into the historic marriage institution. Whatever his motives Chief Justice John Glover Roberts was right when he addressed the gay activists: “If you succeed, that definition will not be operable. You are not seeking to join the institution. You are seeking to change the institution.”  One cannot change the heterosexual character of marriage and still call it ‘marriage’, just as much as one cannot change the structure of a chemical element and expect it to remain the same, functionally and structurally. Any other kind of union that looks like marriage, that is not heterosexual in nature, is not a marriage even if we insist otherwise. It is something else, and thus it should be given another name and a different status.

Redefining marriage by legislation of any kind is one of the most serious insults of the sovereign rule of God over His creation. Since the creation of man and woman was the crowning act of His creative work that put the whole universe in its place, and organized human life on our planet, crippling the institution of marriage by attacking its designated meaning and purpose equals to raising of our defiant hands into the face of God and declaring: “God, you are not in charge any more. We will not let you rule over our affairs any more!” And such act of defiance cannot go without serious consequences, even more so when committed by the institutions of power and governance.

Likewise, if the Supreme Court decides in favor of marriage redefinition, this would mean opening of a Pandora’s box of legalization of many sexual deviations and gender experimentations in the days ahead of us. In fact one may ask why not, because if we are to follow the logic behind the current redefining of marriage consistently, one has every right to ask: Why stop at two people? Why not legislating the unions of three, four, five or more of any gender combination or preference, and of any age combination as long as the union is grounded in love? Also, would it not be only natural to take the next step and legalize polygamy? For, one may ask, upon what moral or ethical principles should we refuse the marriage licenses to multiple lovers too if ‘love’ is the only legitimate criteria for marriage?

If the Supreme Court decides to alter the traditional marriage by a decision of a few, and impose it upon the nation, the decision will soon become a serious religious liberty issue too. It is naïve indeed to believe that the forces that are today bullying bakers, photographers and florists for not serving gay weddings will stop at that. In no time the churches and religious organizations will become target of additional pressure too. When Justice Samuel Alito asked the White House lawyer Donald Verrilli if the religious institutions could lose tax-exempt status over the Supreme Court decision Justice Alito said: “It is certainly going to be an issue. I don’t deny that.”

It is in the alignment with the recent developments to believe that once the states are under the obligation to advance the same-sex marriages under their jurisdiction, they will start making the lives of churches and religious organizations uncomfortable by demanding that they too get in line with the rest of society by accommodating and ordaining the LGBT ministers, and officiating the same sex marriages under the umbrella of their churches and ministerial licenses. It follows too that speaking openly from the church pulpits about the sins of practicing homosexuality and related sexual practices will soon be declared a hate speech by law. And since not all religious organizations will be willing to comply the issue will become a serious religious liberty issue for everyone who has decided to “obey God rather than men” Acts 4:19.

4 Responses to Obeying God Rather than Men