Notes from the Refugee Trail in Serbia 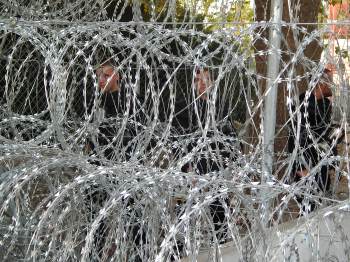 Just over a month has passed since my return from Serbia where, together with the ROM and EUS team, I spent several days encountering refugees from Syria, Iraq and Afghanistan. I tried to keep some kind of journal. Here are the notes I put down at that time:

When our RCRR (ROM Community Refugees Response) action started two weeks ago our eyes were on Belgrade, Serbian capital and the Hungarian border. At this moment the situation is changing by minute. Hungarians have barricaded their country with barbed wire. I hear the first groups of refugees are now moving into Croatia. Hungary has obviously failed in showing kindness to the Syrian refugees. Serbia has treated them well. I hope Croatia will not fall short of following a good example. Lord bless our mission

Had some hours of sleep on the plane to Munich, Germany. Situation on the ground is changing by each hour and we will have to adjust our plans. Maybe we will need to shift our focus on the Serbian – Croatia border? Temperature in Munich 30c. Very hot in Belgrade too. There is no doubt in my mind that when Jesus said, “Whatever you did for the list of those…” he meant the situations like this one with the flow of refugees through Europe. I have a hard time to understand that some who call themselves Christians are at this time acting like those two men in the Good Samaritan story. They are finding all kinds of excuses to “look at the broken man and pass by”. The Bible is very clear what should the attitude of God’s followers be towards the “strangers, refugees, aliens, immigrants”. Today “the strangers” needing help” are the refugees from Syria, Iraq, Afghanistan. Tomorrow it might be us, the followers of Jesus.  Maybe it would be a good thing  to visit even today the place with refugees in Belgrade, just to asses the situation. My Lord, I am surrendering the entire action into your hands.

We saw many refugees in wheelchairs and walking with crutches.

Three powerful days of action are behind us. I believe in the past three days we encountered with our goods at least 2000 refugees. We joyfully worked together with other teams too. Among them was a group form USA, with a known movie producer. We saw other groups of helpers from Serbia, Romania, Austria, Germany. Tired but not sorry for the nights without adequate sleep. We would need a similar action in Croatia soon. Thinking of blocking anyone who continues to spam my FB reports about refugees with offensive and aggressive comments. Need to remind each member of the team to write a page long story by Wednesday.

For me these were the highlights of the past several days that I would keep as the reference points of our action: 1. Mothers and little children. Children changing shoes. Kids seating on the dusty road which I took to the border.  2. Our mission with our cars. We have taken to the border or the no-man’s land up to 100 children, mothers, people with difficulty in walking. We did it with quiet approval of the Croatian police at the border.  3. Refugees were saying: “You are good people… You Christians are loving us”. I remember numerous acts of gratitude. 4. The zeal of our team and others involved in helping. We would quickly eat in the morning and the next time late in the evening. In between we would drink water and help ourselves with bananas. No one complained that the dynamics was crazy. Totally committed to the task of aiding the refugees.  5. The openness of refugees and their trust in us. They were available to talk. They didn’t mind being photographed. There were educated people among them too who spoke good English.  6. The spite of some spamming our FB accounts with disgusting comments.  7. The barbed wire and closed heavy metal gate at the Hungarian border.

I will always remember the waves of refugees moving through those cornfields at the Serbia – Croatia border near Sid.

Spent night in a little hotel 5 km away from the Munich International Airport. I tried to upload a two min video to YouTube. Canceled the upload after one hour of uploading because it said that I still needed another there 360 min to complete the upload.  That much about the fast free internet in a German hotel. A thought. We are all human beings and yet what a difference is there between us? Yesterday I was still in Serbia helping refugees and the last night I spent in Munich, Germany. For me this meant only an hour long flight. For the refugees we met getting to Germany will still take many days spent on their feet, in trains, buses, camps. And the hot days are over. Winter will come soon.